If you have low bone density or worry about your bone health, you’ll want to know about this wonder fruit.

You may know it as the main ingredient in an “old person’s” juice, but it’s got a lot more going for it than you may think!

I’m talking about prunes… which are just dried plums.

Prunes are bursting with antioxidants like polyphenols, vitamin C, vitamin K, and fiber. They’re great at killing free radicals that attack your cells, which means they’re helpful to your bones too. 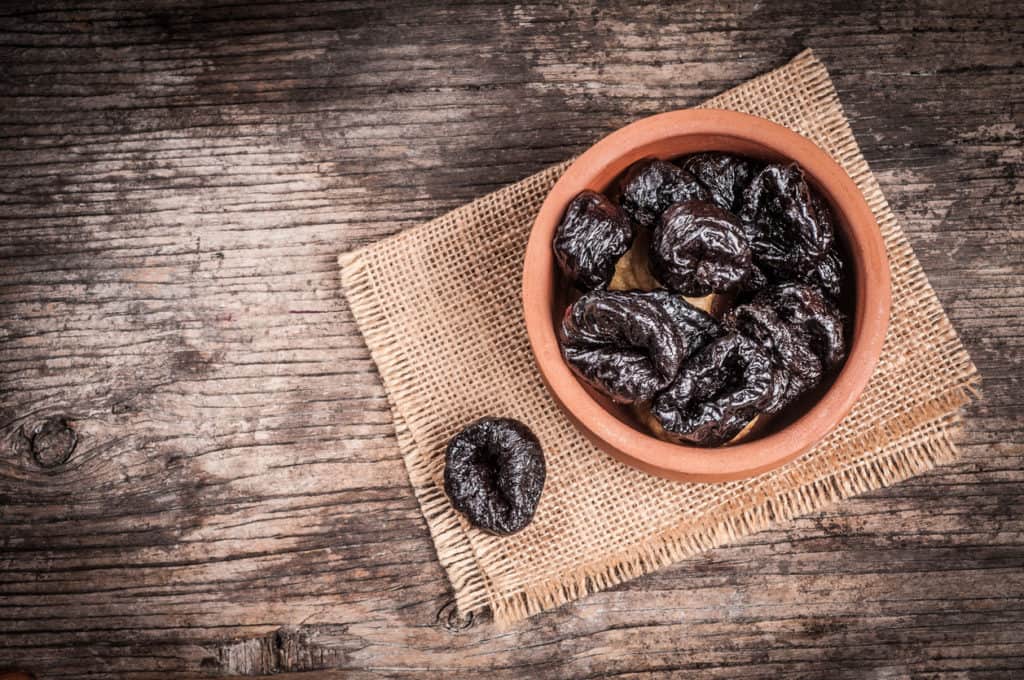 Dr. Bahram Arjmandi – Chairman of the Department of Nutrition, Food and Exercise Sciences at Florida State University – has had a keen interest in prunes for years now. (Especially since his research team found a promising link between prunes and bone density back in 2011.)

Arjmandi had studied many fruits to that point– in hopes he’d find the best ones for healthy bones. And the findings he got from the 2011 study in the British Journal of Nutrition led him to say:

“Over my career, I have tested numerous fruits, including figs, dates, strawberries, and raisins, and none of them come anywhere close to having the effect on bone density that dried plums, or prunes, have.”

Why the high praise?

Dr. Arjmandi and his team studied two groups of osteopenic postmenopausal women over 12 months. The first group had 55 women. They consumed 100 grams of prunes (about 10 prunes) each day. The second group of 45 women consumed 75 grams of dried apples each day. All 100 women also took 500 mg of calcium and 400 IU of vitamin D each day.

The result? After 1 year the prune group had “significantly” higher bone mineral density (BMD) in the ulna (a forearm bone) and the lumbar spine, compared to the dried apple group.

Again, these findings came from consuming about 10 prunes each day. Fast forward to today, and the news may be even better…

First, Arjmandi and company ran a 6-month trial seeing the effects of 50g and 100g of prunes on postmenopausal bone loss. Turns out, the lower dose (4-5 prunes) was about as effective as the double dose (10 prunes) in preserving bone.

That means you may be able to protect total body BMD with half the amount of prunes as before!

Second, Arjmandi and company created a follow-up study from the 2011 group of women– five years after their initial study. The scientists wanted to know if the prune group were able to maintain their higher BMD scores compared with the dried apple control group.

(It’s important to note that of the 20 women who participated in this new 2016 study, none of them regularly consumed prunes in the 5 years since.)

8 of the 20 women were in 2011’s prune group. And as it turned out, these 8 women did indeed show higher ulna and lumbar spine BMD compared to their dried apple counterparts!

True, the study didn’t take into effect other diet and lifestyle factors. But Arjmandi’s group was encouraged with the difference that prunes alone seemed to make.

In fact, the results of their study and those from their peers led Arjmandi to say prunes are a:

So… break out the prune juice, right?

Well, that may be a great idea. But before you do, it’s important to know the “why” behind the prune’s bone-friendly results.

Science can’t guarantee which nutrients specifically contribute to the BMD differences. But… several compounds in the prune protect bone density on their own.

One of these compounds is boron. Boron is a natural trace mineral in the soil and in many foods. It’s a bone-builder and strengthener… and is especially helpful if you’re low in vitamin D!

Prunes happen to have higher amounts of boron than most fruits: 1.18mg in every 100g. In comparison, here’s the amount of boron in 100g of the following common fruits: 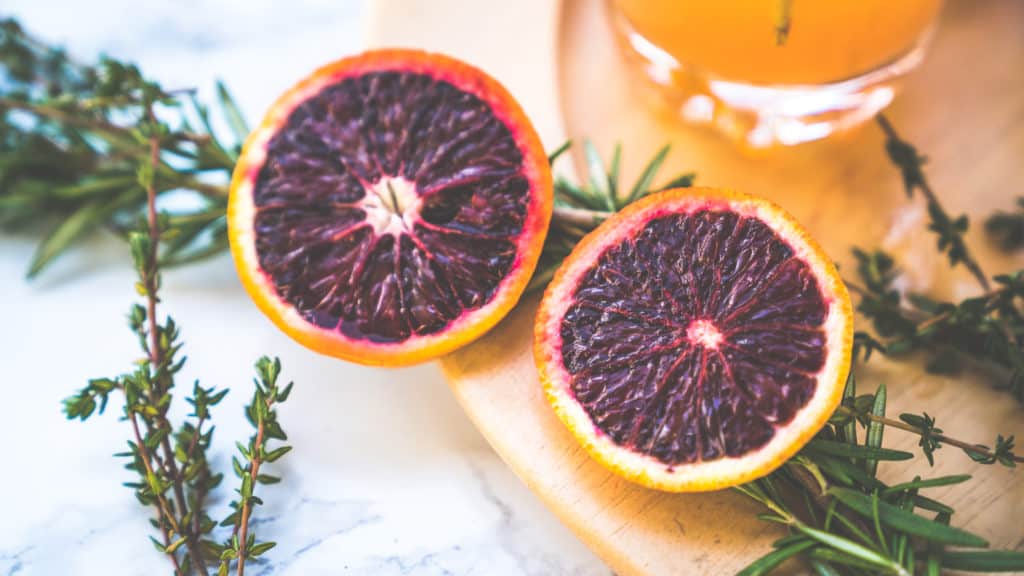 What’s more, prunes have another 2 of the 13 trace minerals your bones need: copper and potassium.

Better still, prunes also contain vitamin K1. Vitamin K1 is anti-inflammatory and thus helpful because it helps prevent excessive osteoclast ( a type of bone cell that breaks down bone tissue) activation. K2, on the other hand, is the form that helps regulate your calcium levels. Think of vitamin K2 like a “recycling plant” for calcium: it brings calcium into your bones while filtering it out of your arteries, where it isn’t needed. This form isn’t in prunes, but we’ll tell you how to get it a little later….

Then there’s the soluble and insoluble fibers inside prunes, like pectin, fructans, and cellulose. These fibers help your bones absorb the minerals they need to stay dense.

As you can see, all these vitamins and minerals work together like a construction-crew for your bones! Each has their own role in creating the foundation and supporting parts of healthy bone.

To put the “cherry on top” of the prune… Arjmandi and co. have shown the antioxidant and anti-inflammatory powers of prunes. Prunes have impressive free radical absorbing abilities, when compared with many popular fruits and veggies.

So, if you’re already a fan of prunes great! Your task should be an enjoyable one. Try to choose prunes without added sugar or preservatives. (And just a note: prunes are a natural laxative, so while too many may cause diarrhea, 4-5 prunes per day which was discussed in the study shouldn’t cause this effect in individuals with healthy bowels.)

Now, if you don’t like prunes, and are looking for a guaranteed way to safely increase your bone density, won’t you try AlgaeCal Plus? It’s risk-free to try it for an entire year.

AlgaeCal Plus contains plenty of boron (3 mg/day). It has a full daily dose of vitamin K2-7 (the most potent form of vitamin K2). And it also has copper, potassium and the other 10 trace minerals we haven’t even mentioned here!

It’s all part of a rare plant-based calcium harvested off the shores of South America. And when it comes to bone density, it’s changed tens of thousands of lives for the better.

Get more details on this page here. 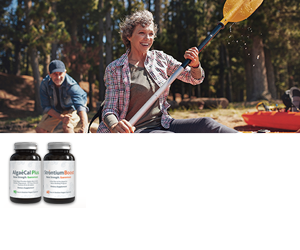 Did you see all the bone-building evidence in prunes’ favor? If you don’t mind eating prunes, I think adding a few to your daily routine is wise. It’s time this wonder fruit gets its due… especially if you’re concerned about your bone density.

If you’re not a prune fan- or you prefer “sure things” to maybes- read about the world’s only superfood calcium source guaranteed to increase your bone density.

Hi, thanks for your useful article and for your answers. Any advise please when to take these 4-5 purnes?

Like it’s better to take them at the same time? In the morning, before meal..?

Would be grateful if you have any advice. Thank you very much again,

You can eat the prunes at any time that best fits into your schedule. You may want to start with 2-3 prunes a day before progressing to 4-5. Sometimes adding a lot of fiber at once can affect bowel habits. Be sure to drink plenty of fluids as well whenever you’re increasing fiber intake 🙂

Thank you for your response and for the advice,

Hi
Are fresh prune good too?

Plums are definitely healthy as well; however, we do recommend eating prunes as these are more nutrient-dense. 🙂

I put 2-3 prunes in my oatmeal for breakfast. The prunes are packaged with with potassium sorbate. Am I getting rid of the preservative by rinsing them?

Thanks for reaching out!

Is drinking prune juice as effective as eating dried prunes?

Good question, Janice. Dried prunes have a much higher fiber content than prune juice — and the fibers in prunes help your bones absorb the minerals they need to stay dense! You may still get some benefit from prune juice, but your best bet is eating dried prunes.

Hello Monica, Thank you for your article. I like prunes but find them so sweet, along with dates, in fact all fruits, except blueberries-my favorite. For someone to curb that sweet tooth it’s almost impossible with such high fructose.
Lida

I have read other articles stating much the same and I would like to know that the addition of prunes to my diet will, indeed, improve my bone density. I do have a question, though. Does the author of this article or AlgaeCal have any connection to the prune industry? Often claims such as this are based on studies performed solely by the industry stand to benefit from the public’s belief in it. If not, it is great news, indeed!
Thank you!

Great question! AlgaeCal does not have any interests in the plum industry. However, after checking both studies (the initial and follow-up) I have found this:

2011 study: The U.S. Department of Agriculture funded Arjmandi’s research. The California Dried Plum Board provided the dried plums for the study, as well as some funding to measure markers of oxidative stress.

2017 Study: This was funded in part by the California Dried Plum Board and the United States Department of Agriculture. The authors declared no conflict of interest.

Giving readers a practical range of fresh foods v. liquids is a nice change to the usual.

Thanks for the feedback! That’s a great suggestion that we’ll keep in mind.

I pour hot water over organic prunes. Let cool . They don’t taste so sweet and a little evaporate mile. They are yummy

Thanks for sharing with us 😊