Recently we asked Lara if she would help provide a series of short, ongoing videos to help you (our customers and readers) stay up to date on the latest facts and science related to bone health.

In this latest video, Lara discusses how long vitamin K2 in the form of MK-4 stays active in your body…and you may be surprised at the answer. Watch the video below (or read the transcript provided) and let us know what you think in the comments. 🙂

Hello, my name is Lara Pizzorno and I’m the author of Your Bones. I’m here to share with you some information that I hope would help you to have healthier bones. In this video clip, we are going to talk about the dietary sources for vitamin K2. Specifically, we’ll be talking about the dietary sources for the short chain menaquinone, MK4, which is a version of K2 that only remains active in your body for about six hours.

The K2 story is a lot more complex than the vitamin K1 story, but I promise it’s not hard to understand. There’s just a lot more information than you find in relation to vitamin K1. And I will explain it fully, and I will repeat the key things you need to know many times.

So in this video, we are going to talk about:

As I explained in one of the earlier videos in this series, if you eat a healthy diet that includes lots of vitamin K1, then your needs for vitamin K1 will be easily met. And if you eat so many leafy green vegetables, that you have extra K1 left over after it has been used to produce the clotting factors that you absolutely have to have so that you don’t bleed out from a paper cut; if you still have some vitamin K1 left over, then the extra K1 would go to your intestines where health promoting bacteria, in your intestines, can convert it into menaquinone 4 or MK4, the short life version of K2.

So in this sense, you can think of leafy greens as an indirect dietary source of vitamin K2.

But the food sources of vitamin K1, leafy greens, are not an adequate source of vitamin K2 for healthy bones because you really need to eat a lot of leafy greens to have enough vitamin K1 left over, so that some will go to the bacteria in your intestines and be converted into vitamin K2.

And, you have to have a healthy digestive tract that contains these healthy bacteria. And, the type of K2 that the bacteria produce, MK4, gets cleared out of our bodies very quickly. It’s only going to last for about six hours. And at best, your gut bacteria is only going to be producing a few micrograms of MK4. But for MK4 to have a beneficial impact on your bones, the research shows that what you need to have is 45 milligrams, not micrograms but milligrams. One milligram is 1,000 micrograms and during the studies, they gave women 15 milligrams or 15,000 micrograms every six to eight hours, three times a day – 45,000 micrograms a day is what they needed to have for beneficial effects on bones produced by MK4.

Your good bacteria, at best, is going to supply you with a few micrograms; it’s just nowhere near enough to do the job. And lastly, another reason why foods that are rich in K1 are not even a particularly great indirect source of K2 is that whether the vitamin K in leafy greens is going to be available for you depends not only on how much leafy greens you consume, but how well you absorb the vitamin K1 from these leafy greens. And vitamin K1 is very tightly bound to chloroplast membranes in plant cells, from which it is absorbed pretty ineffectively.

So if you want get the most K1 from the leafy greens that you eat, you want to try to always serve them dressed with a little oil. 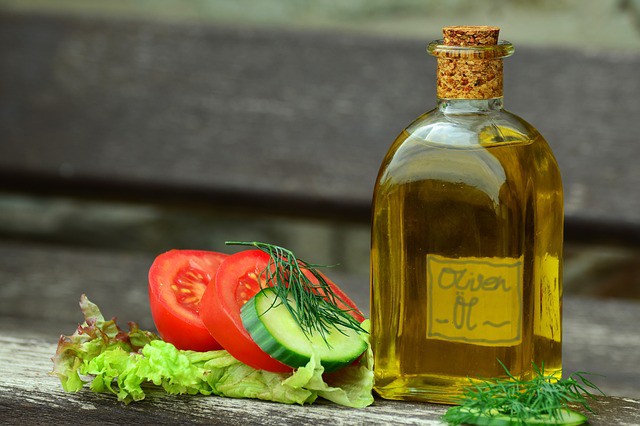 I like some extra virgin oil, which has other benefits for you as well.

Studies have shown that after eating spinach, a leafy green, circulating levels of vitamin K1 can be increased by at least three fold, if the greens are accompanied by a little vegetable oil. One other thing that you have to remember is as we discussed in an early video, when we were talking about vitamin K1, is that you want to make sure that the vegetable oils that you use are not hydrogenated, not even partially hydrogenated.

Don’t eat them. They’re not going to help your bones.

If you are taking AlgaeCal Plus and you are getting 100 micrograms of MK7, and this is the form that remains active in your body for the longest amount of time. Two to three days, unlike the MK4 form which gets cleared out of the body much more rapidly within six to eight hours. And if you regularly eat the foods that contain a tiny bit of vitamin K2 in the form of menaquinone or the other long chain menaquinones, they would supply you with a few more micrograms of K2 that last in your body and will serve you well.

Thanks for reaching out!

100 mcg of vitamin K2 should be sufficient with that amount of vitamin D3 for yourself. However, we recommend discussing any vitamin intake for your daughter with her doctor ❤️

I have hemochromotosis and am finding it difficult to bleed during a phlebotomy. Could the Vit K2 I am taking be the cause of this and is my K2 too high and dangerous?

Vitamin K2 promotes healthy blood clotting and does not cause excess blood clot formation! However, it’s best to speak with your doctor who has a complete understanding of your medical history to determine if vitamin K2 supplementation is right for you — and the optimal dose.

Sorry for any confusion, Gerhard! Both vitamin K2 and K1 assist with blood clotting 😊

Let us know if you have any questions!