We know that too much sugar causes a host of problems throughout your body. It’s best to limit sugar intake wherever possible.

But we’re excited to tell you about a natural sugar that’s handled surprisingly well by your body. In fact, it’s the only sugar known to have a head-to-toe list of health benefits.

Xylitol, pronounced zi-li-tol, is a naturally occurring sugar alcohol found in small amounts in fruits, vegetables, mushrooms and fibrous portions of some plants.

Contrary to the term, a sugar alcohol is neither a sugar, nor an alcohol, but rather a molecule derived from a sugar. But due to its structure, it doesn’t yield the same amount of calories, nor elevate blood glucose levels like sugar does. Because of this, many sugar alcohols including xylitol, are used as natural sugar alternatives in products.

As mentioned, xylitol is found in small amounts in fruits and vegetables and can be sourced from berries, oats, and mushrooms.

However, the amounts are insignificant for food, gum and supplement companies to use. So instead they tend to source xylitol from either corn husks, the fibrous remains of sugar cane harvesting and/or hardwood trees, namely birch, as xylan.

Sugar is associated with weight gain, inflammation, cavities and an ever-growing list of health woes.

Contrarily, xylitol has been shown to have health benefits, making it a viable swap for sugar in some instances.

Xylitol has 40% fewer calories than regular sugar has. While regular table sugar has 4 calories per gram, xylitol only has 2.4 calories.

In other words, a teaspoon of table sugar contains 16 calories compared to a teaspoon of xylitol has 9.6 calories. That 40% reduction in calories may not seem like a lot, but when you consider the average American consumes 130 pounds or more of added sugar per year, it could make a big difference.

The most notable benefit of xylitol may be that it doesn’t seem to cause the same spike in blood glucose levels, and consequently insulin levels, as sugar does because of its chemical structure. This is why xylitol is found in many low-carb, no-carb or reduced-sugar products and suggested as a sugar alternative to those with diabetes or other metabolic issue related to carbohydrate metabolism.

In stark contrast to sugar, xylitol has surprisingly been shown to reduce dental decay and cavities. Again, because of its structure, pathogenic (bad) bacteria in the mouth that cause cavities can’t digest it and thus they don’t thrive on it. In fact, the bad bacteria consumes xylitol (not knowing it can’t digest it) and ultimately starves and ‘dies’. The good news is that your healthy bacteria doesn’t seem to be affected by xylitol. This, in turn, leads to healthy bacteria surviving, bad bacteria dying and cavities prevented. Studies have shown that replacing sugar with xylitol or adding it on top of your diet can reduce tooth decay and cavities by as much as 30-85%!

This will perk you and your skin up if you’re worried about the appearance of aging: xylitol has been shown toboost collagen production.

Collagen is a naturally occurring protein found in skin associated with plump, youthful appearance. You’ve probably heard this term many times in beauty product and procedure commercials because as we get older, the body produces less collagen. Attempting to dip into the fountain of youth, beauty companies add it to the products.

Xylitol consumption has been shown to naturally increase collagen production. How? It directly affects collagen synthesis (the process of collagen creating) by increasing hydroxyproline content, which plays a role in collagen stability. More collagen is a beautiful reason in and of itself to swap out products with added sugar for those with xylitol.

Another benefit of xylitol is that in rodent studies, it has been shown toincrease bone strength by increasing calcium absorption and deposition into the bone matrix.

Several of these studies have been completed in rodents using a variety of methods and with the same results – increase in bone density. That makes swapping out sugar and other sugar alternatives for xylitol a potential benefit to your bones.

Think of the benefits to your teeth alone when it comes to making the swap for xylitol. If xylitol decreases cavity-causing bacteria in your mouth and supports bone health by increasing calcium absorption in the body, you’re looking at stronger, healthier teeth and a reduction in the dreaded dental drill.

More and more it looks like the key to great health and longevity is reducing inflammation, as it is the root of many diseases and promotes the progression of disease states. Swapping out sugar or other sugar additives for xylitol may be one way to curb inflammation, while increasing bone mass.

In addition to preventing inflammation, it’s also important to decrease and heal from existing inflammation. That’s where the famed omega 3 fatty acids, such as those readily found in fish oil, really shine.

This makes adding fish oil supplementation to the picture another healthy habit worth picking up to maximize bone health benefits. When you make healthy changes that benefit you all the way down to your bones, your other organ systems in your body benefit as well.

We’ve discussed what xylitol is and its benefits. Now let’s compare Stevia, Splenda, Aspartame and Sorbitol with xylitol. 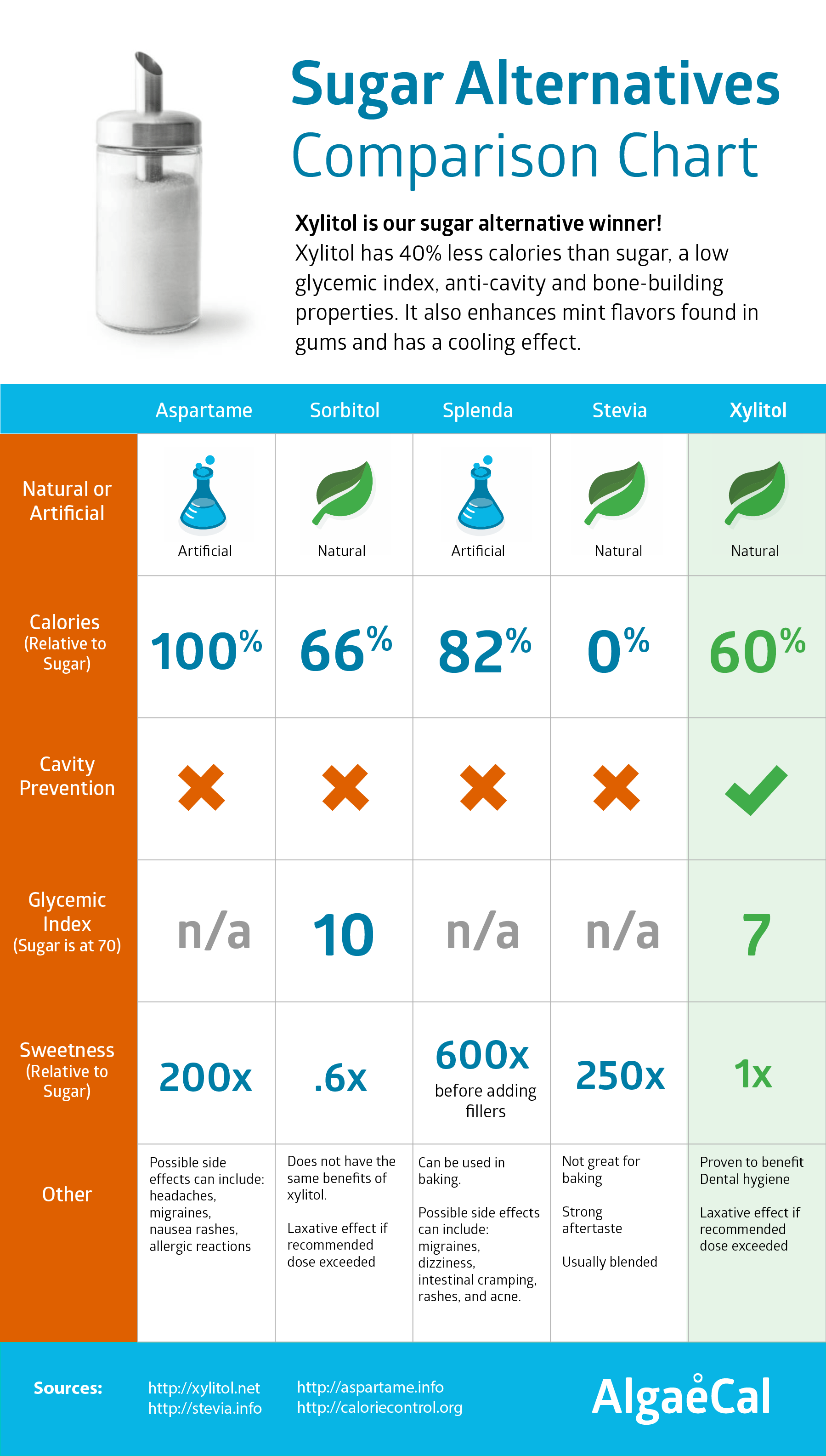 Want to share this on your blog? - Copy and paste the code below.

You may recognize some of those sweeteners as the big names in sugar alternative.

Stevia, Splenda and aspartame are all significantly sweeter than sugar with zero calories, but also with zero known health perks. Let’s take a look at how they compare…

Because it’s that much sweeter than sugar, significantly less is needed to sweeten products making most of what’s in those yellow packets fillers. No one would want to open a packet with a single granule in it to sweeten their coffee. While sucralose hasn’t been associated with any health benefits, it has been associated with some controversies regarding advertising and the safety of this chlorinated sugar product.

Xylitol Side Effects and Dosing

Because xylitol is naturally occurring, it’s safe to consume and generally well tolerated – although some side effects include bloating, nausea, gas, and diarrhea if you eat too much.

“Too much” is subjective, but for the most part amounts greater than 30 to 40 grams, or 7 to 10 teaspoons, of xylitol in a day would be regarded as the too much that causes gastric distress.

Slowly increasing the amount of xylitol you consume over time and breaking it up throughout the day is going to help circumvent or completely avoid digestive woes.

When creating our Triple Power Omega 3 Fish Oil, we were searching for a sugar alternative that would serve more than just the purpose of slightly sweetening the oil, but to also maximize the bone health benefits of the product, too. (It’s also corn-free, non-GMO, dairy-free, and gluten-free!)

That’s when we decided on xylitol.

But, there is one family member who cannot safely have any amount of xylitol. And that’s your dog.

Xylitol has been found to be unsafe for dogs to consume in any amount and if ingested can be fatal.

While xylitol doesn’t stimulate the release of insulin from the pancreas in humans (which is a benefit for those worrying about fluctuating blood sugar levels), this is not the case for non-primate species like dogs. The xylitol is quickly absorbed into the bloodstream, resulting in a dangerous release of insulin from the pancreas. This rapid release results in hypoglycemia (decrease in blood sugar levels).

This is sort of why we want to avoid giving our dogs chocolate, too. Humans are able to metabolize a component in chocolate called theobromine quickly, but dogs process it much slower. This allows it to build up toxic amounts in their system.

So yes, while dogs are a man’s best friend. We can’t eat the same. But it doesn’t have to do with what’s good or bad necessarily, but rather the way we metabolize and process certain foods.

The most common form of xylitol poisoning in dogs is from sugar-free gum (that contains xylitol).

For that reason, it’s important to keep all xylitol and xylitol containing food products and supplements out of your dog’s reach (and chocolate, too).

Xylitol is safe and contains 40% fewer calories than sugar with added health benefits to your skin, teeth, bones and overall health.

When it comes to choosing products like Triple Power Omega 3 Fish Oil, xylitol stands out as another reason to choose it over other products.

That and the sweet novelty of having a fish oil that you actually crave instead of dread.