Recently we asked Lara if she would help us provide a series of short, ongoing videos to help you (our customers and readers) stay up to date on the latest facts and science related to bone health and overcoming osteoporosis naturally.

In this latest video, Lara discusses why bone loss increases rapidly after bariatric surgery. Watch the video below (or read the transcript provided) and let us know what you think in the comments. 🙂

Hello, I am Lara Pizzorno, the author of Your Bones, and I’m here to share some information with you that I hope will help you or someone you love to have healthier bones.

As I mentioned in our last video, researchers are now trying to figure out the mechanisms that are responsible for the bone loss that occurs after bariatric surgery, which is surgery to treat obesity.

In this video, I’d like to share with you the current theories about why this bone loss is happening.

One commonly suggested theory is that bone loss is occurring because the skeleton now has to carry around a lot less weight because of the substantial weight loss that occurs the first six months after bariatric surgery. But obese rats that undergo gastric bypass have been found to have greater bone loss than sham-operated obese rats that are calorically restricted to achieve the same amount of weight loss.

And as I reported in another video, the one in which I talked about research that shows that belly fat is associated with bone loss, being obese or overweight when the extra fat is mostly around the mid-section has actually been shown to promote excessive bone loss because belly fat, which is called visceral adipose tissue, or VAT in medical jargon, increases the production of pro-inflammatory molecules that are called cytokines, and these signaling molecules ramp up the production and the activity of the specialized cells that breakdown bone, the osteoplasts. So both the rat and the VAT studies suggest that there are other factors here that are at least as, or maybe even more important causes of the bone loss that occurs after bariatric surgery.

Another proposed reason for bone loss after bariatric surgery is the great big drop that happens in intestinal calcium absorption. And here’s the kicker. This happens despite supplementation with calcium and vitamin D.

I would like to tell you a bit about a recent study showing bone loss despite vitamin D and calcium supplementation because the findings were so startling. This research was presented at a medical conference of the American Society for Bone and Mineral Research in 2014 and will soon appear in the Journal of Bone and Mineral Research. You can look for it there in the next couple of months. But right now, I can give you the scoop on what they found.

If you listen to my other videos, you may remember an earlier video in which I shared with you how to get the most from your calcium supplement. I told you about research showing that we absorb more calcium when we consume it in smaller amounts at a time instead of taking a large dose. Well after their surgery, these gastric bypass patients were given a small dose of 200mg of supplemental calcium. But their fractional calcium absorption plummeted from their before gastric bypass surgery amount of 38.7 percent to an average of just 6.9 percent. This dramatic decline in calcium absorption occurred despite careful attention to maintaining a vitamin D status of at least 30 nanograms per ml, which I have to say I consider far from optimal.

The Vitamin D Council recommends 60-80 nano grams per ml as the range to shoot for the circulating form of vitamin D, which is 25 (OH) D.

These patients also had a regular calcium intake of 1200 mg a day, which after reading dozens of papers now discussing the effects of bariatric surgery on bone, I have to say I do not think is sufficient for those who have undergone bariatric surgeries. So despite a daily calcium intake of 1200 mg a day after gastric bypass, subjects in this study daily average absorbed calcium fell from 392 mg each day to just 82 mg a day. Far from enough to provide the calcium needed for healthy bones.

I believe that in individuals who have had bariatric surgery, levels of 25 (OH)D, the circulating form of vitamin D in the blood, should be at truly optimal levels, which are 60 – 80 nanograms per ml, not 30. And the calcium intake should be at least 1500 mg a day taken in small doses spread throughout the day.

Part of the drop in bariatric surgeries calcium absorbing ability surely has to do with the fact that calcium is actively absorbed in the part of the digestive tract that is bypassed in Roux-en-Y surgery, and also because in both Roux-en-Y gastric bypass and sleeve gastrectomy, the two most popular forms of bariatric surgery, almost all of the stomach is removed including all of the part of the stomach called the fundis, which is the part that contains parietal cells. These are the specialized cells in the stomach lining that are responsible for secreting the stomach acid that we absolutely have to have both to digest our food and to solubolize calcium, which is the way in which it becomes ready to be absorbed.

As one would expect with so little calcium able to be absorbed, these pre-menopausal women’s blood levels of parathyroid hormone shot up and so did their blood levels of a marker of bone resorption called c-terminal telopeptide. Let’s talk about these a little bit.

If you’ve read “Your Bones”, you may remember that parathyroid hormone increases the activity of the cells that break down bone, the osteoblasts. They do this when our blood levels of calcium are too low, so that calcium will be liberated from bone into the bloodstream where it goes to all parts of the body and is used for many, many other functions besides just our bones. For this reason, chronically elevated levels of parathyroid hormone cause bone loss.

C-terminal telopeptide, which I explain in detail in the labs appendix in Your Bones, can be checked using a blood test that you can have run to see how your bones are doing. It will be listed as CTX, and it is a marker of bone resorption or bone breakdown. In these pre-menopausal women, blood levels of CTX increased by an average of 276 percent.

In the two year study we’ve talked about in earlier videos that was published in the Journal of Clinical Endocrinology and Metabolism in February of 2015, c-terminal telopeptide immediately went up to more than double the levels that it was before the gastric bypass surgery, and it remained at these very high levels throughout all two years of the study. When subjects in this study were evaluated by both DEXA and a newer, and frankly more accurate, type of scan, called quantitative computed tomography, or QCT, which you might want to ask your doctor about having run for you, they were evaluated with QCT and DEXA two years after surgery. DEXA showed an average additional loss of bone mineral density of almost five percent in the second year. Quantitative computed tomography showed a bone mass loss of almost six percent.

I consider myself a bit of an exercise junkie, and I try to get in about an hour or an hour and a half a day. If I add in housework like cleaning up the kitty litter and vacuuming and grocery shopping and cooking, I think I can bump that up to another hour of physical activity a day. So my physical activity score is only around 17 1/2 hours a week, which makes me a wimp compared to these gastric bypass patients.

Altogether, the findings of the latest studies suggest that what we’ve understood to be the usual bone regulating mechanism, in other words consuming what would normally be adequate amounts of calcium and vitamin D and the beneficial effects that we expect to see happen from weight bearing exercise, are not going to be enough to prevent bone loss after bariatric surgery.

Researchers are just now starting to look into the fact that gastric bypass surgery also causes large changes in a bunch of hormones.

Those produced by the cells that make up our gastrointestinal tract which include leptin, gastrin, ghrelin, and serotonin, and hormones produced by our fat cells like edepo nectin, and even our sex hormones estrogen, progesterone, and testosterone, and our stress hormones, such as cortisol and a number of others.

The noises that you hear in the background are my cat eating all the papers in my inbox, so I’m just going to finish this and we’ll hope that there’s something left.

Many of these hormones are impacted by bariatric surgery, and they are now being found to also have direct or indirect effects on our bones. It’s too early to draw any firm, or even firmly hypothetical, conclusions now about what impact bariatric surgery has on the network of all these hormones and how these changes will impact our bones long term.

You can count on me to let you know what the research shows as soon as these studies are published, but we can’t just sit around and wait losing bone while they try to figure it out. We need to look today at what can be done now to promote healthy bone remodeling if you or someone you love has had gastric bypass surgery. And that will be my topic in my next video.

I hope you’ll tune in, and I apologize for my cat.

PS: Here is Smidge after eating my notes during the video. He is now a happy and content cat napping in the sun! 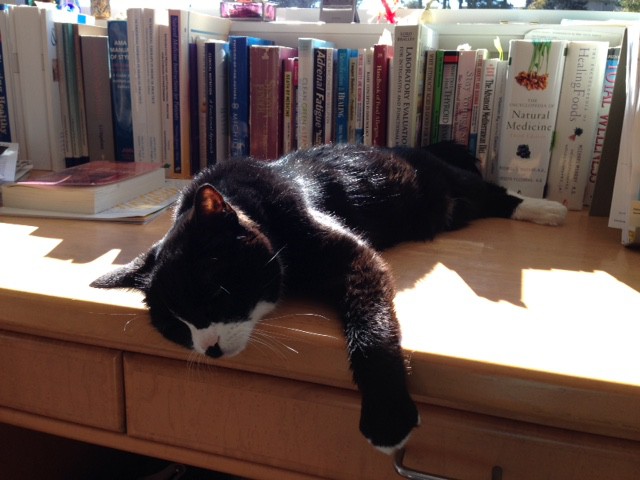 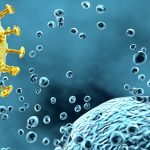 The Role of the Immune System in Bone Loss

Your bone and immune cells have a close relationship… and recent research shows that relationship may explain why bone loss occurs in certain chronic conditions, like osteoporosis! Discover the link…
read more >

Enter AlgaeCal's "Show Your Bones Some Love" giveaway for your chance to win a 6-month Bone Builder Pack!
read more >