Dr. William Harris. Dr. Harris is an internationally recognized expert in omega-3 fatty acids and heart disease. The following presentation is a three-part educational series on omega 3 fatty acids – the basics, the benefits and how you can test your levels. This is part one of the three part series, which will cover :

The Basics: A look at Omega 3 FA’s and their mechanisms of action. from OmegaQuant on Vimeo.

John: OmegaQuant presents a three-part educational series on the basics and the benefits of omega-3 fatty acids with a special emphasis on the HS Omega-3 Index blood test. Part one of this series covers the basics, part two the HS Omega-3 Index, part three the benefits of increasing omega-3 intakes, specifically looking at cardiovascular disease, dementia, and mental health.

Your presenter is Dr. William Harris. Dr. Harris is an internationally recognized expert in omega-3 fatty acids and heart disease. He’s a recipient of 5 NIH grants, has over 120 publications related to omega-3 fatty acids. Dr. Harris currently serves at Sanford Research Center in Sioux Falls, South Dakota as the director of Cardiovascular Health Research. He’s also serving as a professor at the University of South Dakota, Sanford School of Medicine, and Dr. Harris is the founder and president of OmegaQuant.

Dr. Harris: Thank you, John. This is Dr. Harris. I’m going to discuss in this slide presentation, which takes about an hour and 10 minutes all told, three different segments about omega-3 fatty acids. I’m going to talk about the basics here, then we’ll talk about, as John mentioned, the omega-3 index and then some of the benefits of eating more omega-3.

Within this first section on the basics, we’ll first of all discuss: 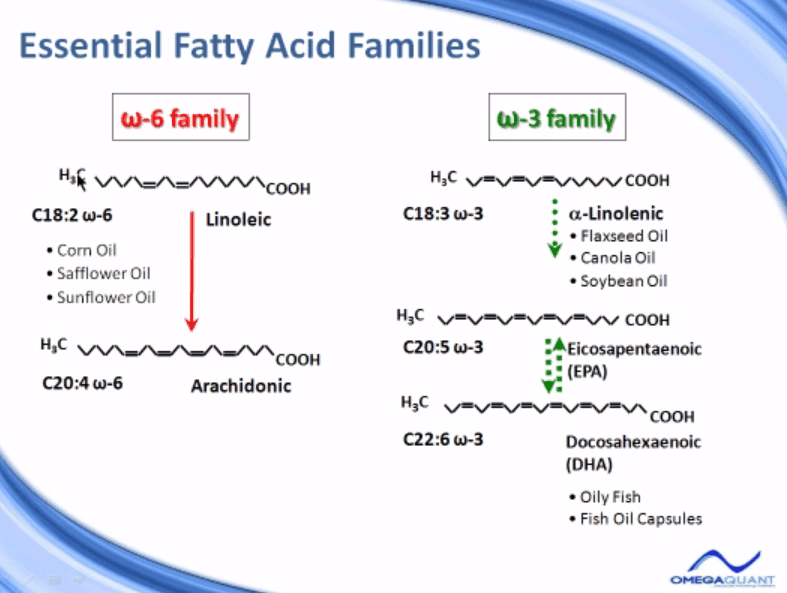 If we call this the alpha carbon and this is the omega carbon, then beginning from the omega carbon and counting six positions back, omega minus six, this is where we encounter the first double bond. And this is the same for all omega-6 fatty acids. They all have the same structure at the end. Linoleic acid can be very sparingly, but somewhat converted to arachidonic acid, which is probably the most important omega-6 fatty acid.

Metabolically, it’s the precursor for many, many important molecules in the prostaglandin-leukotriene cascade, which control a variety of cellular metabolic steps. Omega-6 fatty acids are plenteous in our diet. They come from a variety of vegetable oils, corn oil, safflower oils, and sunflower. Soybean oil has a fair amount of omega-6. So there’s not a concern for getting more omega-6, but omega-6 fatty acids are good for us.

We do not want to reduce the omega-6 intake as some people are calling for.

On the other side, the omega-3 family. Again the structure here, counting from the omega carbon is the third double bond… The third carbon has the first double bond and that structure is not interconvertible. We haven’t got the enzymatic systems to convert an omega-3 to an omega-6 or vice versa. And so we have to have both families in the diet.

There is very limited conversion in the body of ALA to the omega-3 fatty acids, the long chain omega-3s that are found in fish oils.

Perhaps less than 5% of ALA is converted to EPA and less than a 10th of a percent is converted down to DHA. In focusing on the omega-3s in fish oils, we have again EPA, which stands for eicosapentaenoic acid. “Eicosa” means 20, it’s a 20-carbon molecule, “penta” is of course 5, it’s 5 double bonds, and then “enoic acid” is just the chemistry term for a fatty acid with multiple double bonds.

EPA is what we’ll call it in this presentation. DHA is “docosa,” which is 22, “hexa” 6 double bonds, in again the standard omega-3 configuration here. EPA and DHA are found in oily fish and in fish oil capsules.

The best sources probably are something like salmon steaks, which provide a tremendous amount of omega-3 fatty acids, are a very good source.

We’ll now go on to look at some of:

The cellular mechanisms of action of omega-3

and we’re not going to go into great detail on this, but simply to give an overview of one of the most well-known effects of omega-3 fatty acids:

I’m going to show just one slide that’s quite a complex slide but a very nice one that illustrates all of these factors. And this is a slide kindly provided to me by doctors Wu and Mozaffarian. It’s not published yet, but it’s a figure in a review article that they’re working on. The Molecular Pathways That Are Affected by Omega-3 Polyunsaturated Fatty Acids is the title. And I would note here that sometimes the term n-3 means the same thing as omega-3, so they can be used interchangeably. 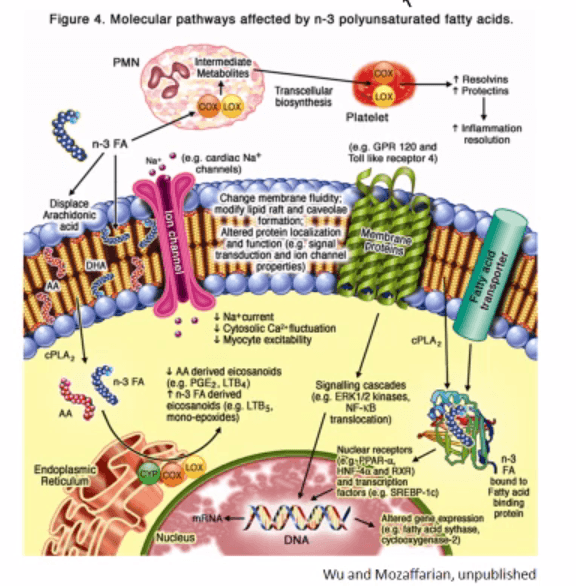 The omega-3 fatty acids can have effect on cells outside in the bloodstream actually. These are polymorphonuclear or white blood cells. This is platelets. Platelets are the cells that get activated when you have a cut and they initiate the process of clotting. The omega-3s, when they’re on board, will reduce the stickiness of platelets and make your blood less likely to clot, which is a good thing to a point.

There is no increase risk of bleeding in people taking omega-3s.

That’s commonly misunderstood, but that is the case from the randomized trials. We know that there’s no increase risk for clinically significant bleeding. Within the cell, this now here is the cell membrane. And the cell membrane is a mixture of phospholipids that are on the outside and on the inside, the outer leaflet, the inner leaflet.

So that’s one way we think the omega-3 is just by changing the flexibility of the membrane, it changes the function of many of these proteins.

Omega-3s can actually affect the DNA.

It can turn on some genes, turn off some genes. And by virtue of doing that, that’s the way it reduces triglyceride levels, by activating certain gene products and proteins that are produced. The omega-3s have a wide variety of effects in biology only summarized briefly here in this very nice figure.

Let’s look at some of the sources of omega-3 EPA and DHA.

They come preformed. We get them in fish and we get them in dietary supplements. Just a quick list of some of the oilier fish, herring. Salmon, whether it’s wild or farmed, about the same amount of omega-3. Mackerel is rich. Some oysters remarkably have a lot of omega-3 in them. Sardines and albacore tuna, the white tuna, has got more omega-3 than the light tuna. 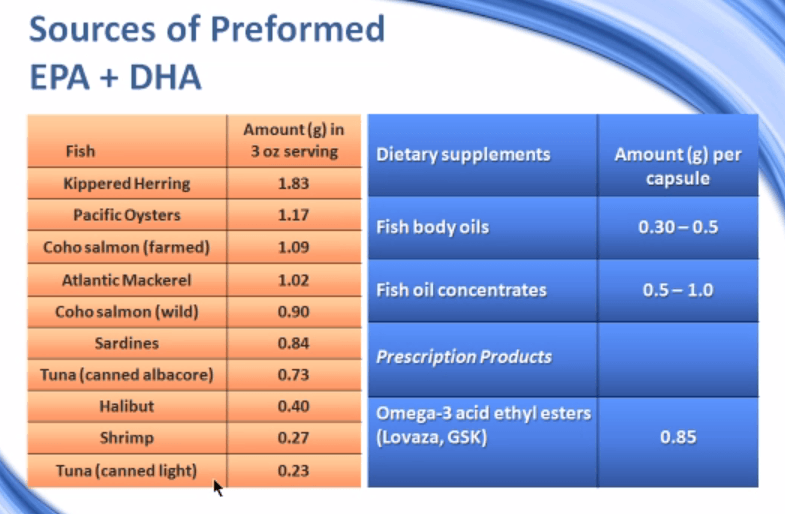 Fish that are not on this table because they have very little omega-3 would be things like catfish and perch and bass and tilapia, very popular these days, very little omega-3. And so there’s a wide variety of omega-3 content in fish. Dietary supplements is another way. Of course, fish body oils are the standard fish oil. Capsules, you can get at the drugstore, the health food store.

These would be typically a 1,000-milligram capsule containing 30 to 50% EPA and DHA. So if you wanted to get about one gram of omega-3 from the most inexpensive fish oil pills, which are about 30% EPA and DHA, you would need to take three of these pills. Fish oil concentrates are more expensive, they’re more concentrated, hence the name there, between half a gram and a one gram of omega-3 per capsule.

And this one gram of omega-3 capsule is actually about a 1.3 gram. It’s a bigger pill. To get one gram of EPA and DHA into the single pill, the pill has to be bigger. The prescription omega-3 that’s available in the United States is called Lovaza from GlaxoSmithKline. It has about 85% EPA and DHA, so 850 milligrams per single capsule.

And we’ll see several studies coming up, they use one capsule of Lovaza or the omega-3 acid ethyl esters, which provided 850 milligrams of EPA and DHA. These are standard sources of omega-3. In the future, there are going to be other sources. And just to go over this rather complex graph quickly, the omega-3s actually start in nature by being produced by microorganisms in the ocean, microalgae.

For example, single-celled algae produce the omega-3s from sunlight using sunlight as energy. And then typically the fish, actually small crustaceans will eat the microalgae and fish will eat the crustaceans. The omega-3s get incorporated in the fish tissues. Fish don’t make anymore omega-3 than we do, but fish become a good source for omega-3 for humans.

Of course, fish can be caught and the oil rendered to produce a bulk oil which can be reduced to a dietary supplement, which we would also take. These microalgae can also be used as a source of omega-3 for food for fish in aquaculture. And the microalgae, the oils can be extracted into bulk oils which can be made into nutritional supplements or it can be eaten directly by us.

All of these pathways eventually begin with the microalgae. On the other side, genes can be removed from these algae or from these single-celled organisms and put into either crop plants or pasture plants. The best example here is soybean. You can put DNA from other flowering plants and algae into soybeans and produce an omega-3 rich soybean oil.

But some of the products of these genetically modified foods can be either eaten directly or fed to animals to increase the omega-3 content of foods. These strategies are being used now and some of them will actually come into reality as we see the need for greater sources of omega-3 without actually harvesting all the fish in the ocean.

The American Heart Association has recommendations for fish and omega-3 fatty acid intake based on different populations.

Patients without documented coronary heart disease, the AHA recommends eating a variety of fish, preferably oily fish at least twice a week and include oils and foods rich in ALA. I’m not sure how important that is, but I would point out that if you actually ate oily fish twice a week, you would get between 400 and 500 milligrams of EPA and DHA per day on average.

So that is a reasonable target intake in my view for people who want to know how much EPA and DHA they should get each day, 400 to 500 milligrams. Patients with documented coronary disease, people who have known heart disease are recommended to take a higher amount, about one gram of EPA and DHA. It’s about twice as much as up here, preferably from fish, but supplements can be used and typically would be used.

Patients needing triglyceride lowering, two to four, actually three to four grams of EPA and DHA per day is a triglyceride-lowering dose. Other dose is one gram. Half a gram will not lower triglyceride levels. So this is just for a small group of people. So that will end part one, the discussion of the basics…

Do you have a passion for health and wellness? Are you one of the hundreds of thousands of students across North America struggling to afford tuition, school supplies, and books? Then, we encourage…
read more >