It’s no secret that smoking is associated with cardiovascular diseases and other health conditions such as cancers of the lungs and esophagus but now there is a new study that points at smoking’s connection with osteoporosis. Though the link between the two is not new and had been brought to light almost two decades back, this new study throws light on exactly how cigarette smoke weakens the bones making them susceptible to fractures and osteoporosis. (1)

The study was funded by Cancer and Smoking Related Disease Research Program and the Nebraska Tobacco Settlement Biomedical Research Program. The findings of the study were published in the May issue of the ACS journal called Proteome Research. The report conclusively exhibited how smoking causes for greater production of two proteins both of which trigger the natural process in the body to break down bone.

The older study from two decades back had showed that toxins from the smoke of the cigarette had made the bones weak over a period of time as the toxins affected the activity of osteoblasts which are bone making cells and osteoclasts which were cells responsible for bone break down. However, the current study has thrown light on how the smoke from cigarettes weakens bones and this it did by analyzing the differences in genetic activity in bone marrow cells of smokers and non-smokers.

As per lead author of the study Gary Guishan Xiao, those who smoked manufactured unusually large amounts of two proteins which are responsible for the production of osteoclasts. Osteoclasts are cells that are help in bone resorption or break down. This experiment was then replicated in the mice model and results were confirmed. (2)

Osteoporosis is a condition that is characterized by the weakening of the bones making them almost porous and lending them to frequent fractures. Risk fractures include small frame of the person or thin bones, inactive lifestyle, genetic inheritance of the disease, early menopause, alcohol abuse, usage of certain medications, low calcium intake and Vitamin D. To this, cigarette smoking has now also been added as a risk factor showing a direct relationship between tobacco usage and decreased bone density. Osteoporosis is believed to afflict as many as 40 million people in the US alone.

Any analysis made on bone health due to the impact of cigarette smoking is not simple as other factors that coexist in smokers also contribute to osteoporosis in them. These factors could be the presence of bad eating habits, sedentary lifestyles, alcohol usage, early menopause etc. However, a majority of the studies that have been done trying to establish a link between smoking and bone health have had a few common evidences and they are: (3)

* Abstract of the technical report of the study may be accessed at:

Enter AlgaeCal's "Show Your Bones Some Love" giveaway for your chance to win a 6-month Bone Builder Pack!
read more > 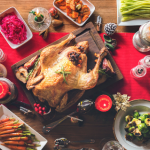 The Ultimate Guide to A Bone-Healthy Christmas

Discover 19 bone-healthy holiday menu items to try this holiday season! Some are traditional favorites with a few healthy swaps, while others are completely new. Enjoy and happy holidays!
read more >