Words come out of our mouths just from habit. We often forget the true, original meaning. Breakfast is one of those. It means to literally ‘break-the-fast’ that started the night before. Granted it’s not a long fast, but still there is an ongoing debate on when it’s best to break it.

And your bone health may be affected by which position you take.

Since you were a child you were prompted to eat a hearty meal in the early morning, as that would provide the fuel that propels you throughout your day.

However, a new school of thought emerged, suggesting that breakfast may be over rated – you may have heard the buzz around “intermittent fasting“. Two points were made that allowed us to push the seductive snooze button one more time and sleep through breakfast because…

By withholding food from your body for 16 rather than the typical 8 hours, your body feeds off your fat storage.

Both points are compelling pieces of information in that they allow us extra sleep AND delivers increased fat burn. What’s not to like about that?

What’s not to like is: sleeping through breakfast makes you more likely to eat nutrient poor foods, thus starving your bones of much needed building blocks. Here’s how…

Skipping breakfast and mildly starving your body may in fact lead to you burn more calories throughout the day. But that benefit may be offset by the results of a new Cornell University study that suggests forgoing the first meal of the day leads to you consuming more empty calories. [1]

This study had 128 participants split into two groups. Group one didn’t eat for 18 hours, starting from 6pm the night before, and skipped breakfast. The second group ate breakfast. Both groups were invited to a buffet-style lunch.

Incredibly, those who bypassed breakfast were 30% more likely to reach for carbohydrate-rich foods first, (dinner rolls and french fries) versus 10% for the breakfast eaters.

On top of that, the study showed that whatever food types participants reached for first is what they continued to fill up on.

Turns out the urge to eat refined carbohydrates before other foods was costly for the fasting group in two ways as they didn’t just start off with carbs, but finished with them too. In the end they ate 46.7% more refined carb calories than those who made healthier first choices! And as you already know, refined carbs are known to convert to sugar and ultimately, body fat.

Add to that, the participants who lunged for carbs first (the overnight fasters that is) ate an average 20% more calories overall than those who started the meal with proteins or vegetables.

The study points out what can happen when we skip meals, and concludes fasting leads people to be, “drawn to starches, and will eat them instead of nutrient-dense vegetables. Even relatively mild food deprivation can alter the foods people choose to eat, potentially leading them to eat starches first and most.”

The Breakfast Fork in the Road

If you can control yourself to avoid nutrient poor carbs (by keeping in mind this built in carb affinity we have), then you may be able to still reap the benefits of intermittent fasting, and enjoy the extra sleep from skipping breakfast.

But if your self discipline is more around the average, then going back to a morning mineral-rich meal will be in your bones’ best interest.

That said, here are 3 easy and quick bone-building breakfast smoothies you can make that will help keep carb binging in check – all day. They all contain good amounts of calcium (at least 200mg), magnesium and more. 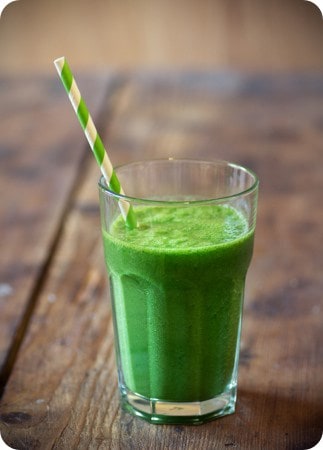