Researchers from the Harvard Medical School and University of Connecticut, collaborate on this landmark study which was accepted for publication in an upcoming issue of the peer-reviewed journal, Molecular and Cellular Biochemistry. In direct head-to-head tests, the scientists compared the effects of AlgaeCal with the two top-sellers, calcium carbonate and calcium citrate.

In other words, the AlgaeCal calcium increased the number of human bone building cells by 400 percent more than calcium carbonate. The study findings provided evidence that AlgaeCal plant calcium is superior to the two most popular forms of calcium in all test parameters – the first time in the history of calcium research that a significant difference was shown between the many commercially available calcium ingredients’ effect on bone cells.

Watch this video about osteoporosis, learn how osteoclasts, osteoblasts and osteoporosis affect your bones.

Narrator: In America, 10 million people suffer from osteoporosis. There are grandparents, teachers, and friends, and yet many of us don’t even know what osteoporosis is.

Dr. Brian Kessler: Osteoporosis is a disease that thins and weakens bones, making people more susceptible to fractures. To understand this condition, it helps to look at the role bones play in a healthy body.

Bones are composed primarily of calcium. In fact, 99% of the calcium that’s present in the body is found in bones. However, calcium is also necessary for other bodily functions like blood vessel contractions. When sources in the blood run low, a normal process called resorption begins.

Resorption steals calcium from bones to be recycled for use in other parts of the body. During resorption, scavenger cells with saw-tooth membranes, called osteoclasts, attached to bone surfaces. There, they tunnel into bone and regurgitate calcium into the bloodstream for use by other body parts.

Resorption is complemented by a normal process called formation. During formation, construction cells or osteoblasts move into the tunnels left by osteoclasts and release strands of collagen into the holes, effectively
filling them.

So how does this relate to osteoporosis? It’s simple. Bone weakening and loss occurs when the osteoblasts can’t keep up with the osteoclasts. Put another way, over time, the bone breaking cells continue about their business while the bone building cells slow down. The result is bones that are too weak to carry their load, increasing the risk of fractures.

The most common form of the disease, primary osteoporosis, is a result of normal bodily changes like menopause or
aging. Type one primary osteoporosis occurs in women in the several years prior to, during, and following menopause. During this time, decline of estrogen levels contribute to type one osteoporosis.

Type two primary osteoporosis results from the normal cumulative effects of aging. This gradual loss of bone
density doesn’t usually show up until after the age of 75.

Meanwhile, medications like corticosteroids, thyroid hormones, and chemotherapy drugs also increase the risk of
this disease.

Although osteoporosis can occur from a variety of factors, its effects are the same — weakened bones that often break easily. If you have concerns about osteoporosis, please see your doctor.

Narrator: Want to learn more? Check out other videos and sources on this site for more information. 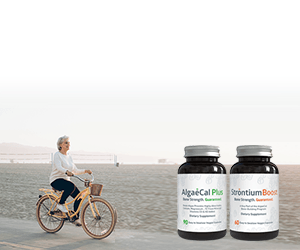