As you may know, I competed as an NCAA Div. 1 athlete while attending the University of Wisconsin-Madison. There, I witnessed the effects of Female Athlete Triad firsthand from my teammates and fellow athletes. But at the time, I didn’t know the consequences of a missed cycle or realize the impact that poor nutrition could have.

I’m now a certified personal trainer and know so much more about health and wellness.

Female Athlete Triad has come up again lately with some of our customers and readers, so I wanted to take this opportunity to shine some light on this lesser-known topic.

Whether you’re an athlete yourself or looking out as a grandparent, parent, coach, or mentor for the health of the young women in your life, this post addresses the signs, symptoms, and treatments of the Female Athlete Triad.

What is the Female Athlete Triad?

The Female Athlete Triad, also known as Triad, refers to the interrelationships among energy availability, menstrual function, and bone mineral density. These may result in clinical manifestations such as eating disorders, amenorrhea (absence of menstruation), and bone loss.

And when proper nutrition is achieved — these same relationships promote optimal health.

The Female Athlete Triad was first acknowledged by the American College of Sports Medicine in 1992. It is most common in athletes in sports that promote leanness, so things like gymnastics, figure skating, and long-distance running. Triad is also extremely common in the dance community. One dance-based study found 77% of participants had low/negative energy availability. An additional 32% had disordered eating, and 36% suffered from menstrual irregularities.

But it’s not just athletes who suffer from this. In one study, it was found that while triad was prevalent among 5.4–26.9% of elite athletes, it also appeared in 12.4–15.2% of the regular activity-level control group. Another study compared the prevalence of triad in high school athletes against sedentary students; the numbers were surprisingly high for both. One or more triad symptom was noted in 78% of athletes and 65% sedentary students. Both groups showed an average of 36% low energy, but athletes showed a higher instance of menstrual irregularities at 54% versus 21% in the sedentary group. Sedentary students, however, were almost twice as likely to suffer from low bone mineral density than their athletic counterparts. This is likely connected to the bone-health benefits of weight-bearing exercise. 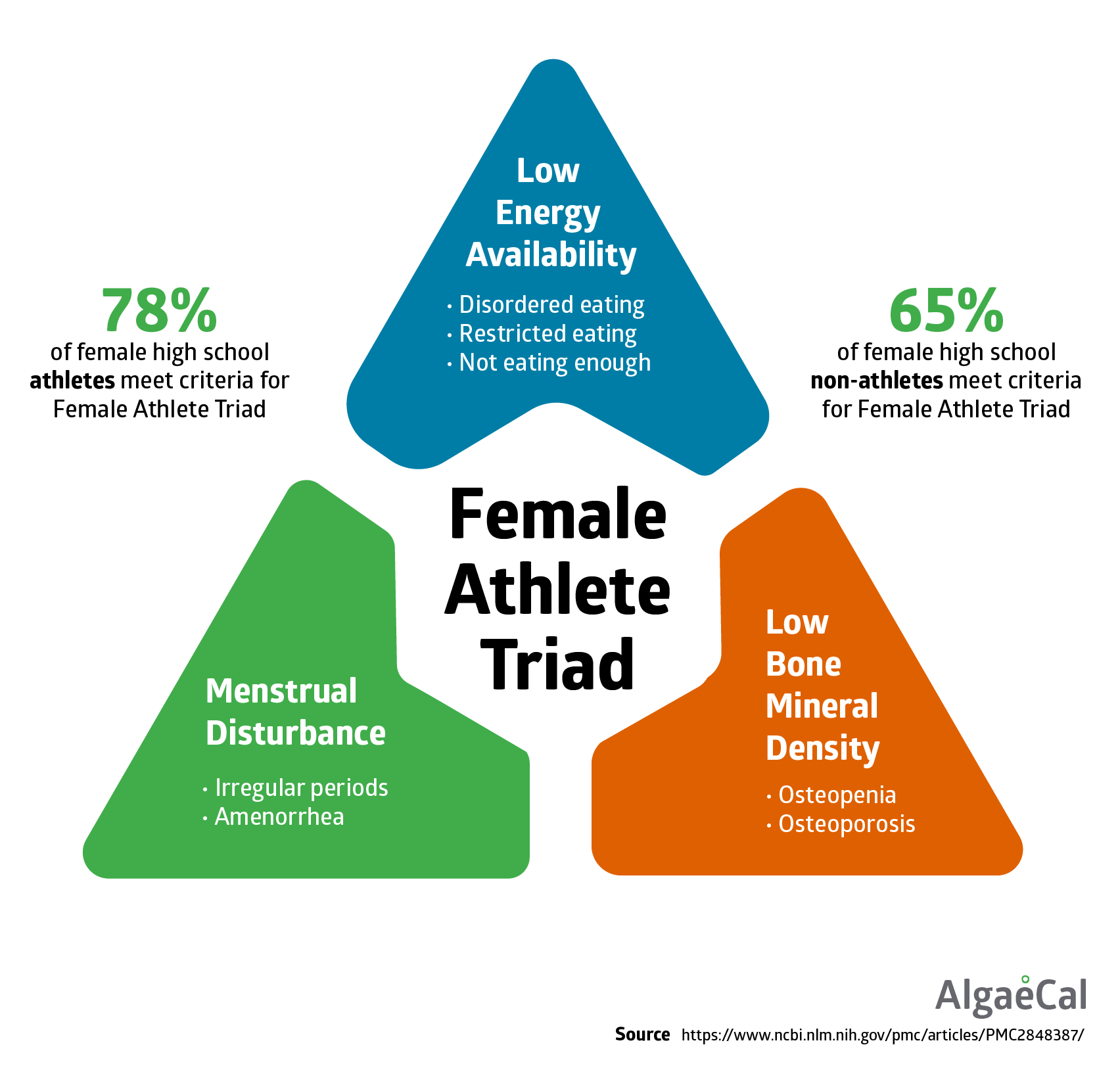 Symptoms of the Female Athlete Triad

As with many other conditions, signs and symptoms of the Female Athlete Triad may not be all present at one time. Even without simultaneous clinical symptoms, women can still be afflicted by the triad. And underlying conditions can still wreak havoc on your body.

So, here are the signs and symptoms to keep a lookout for:

Since triad so often affects girls and young women, parents and guardians are encouraged to be aware of the signs and promote a healthy energy intake/outtake balance. 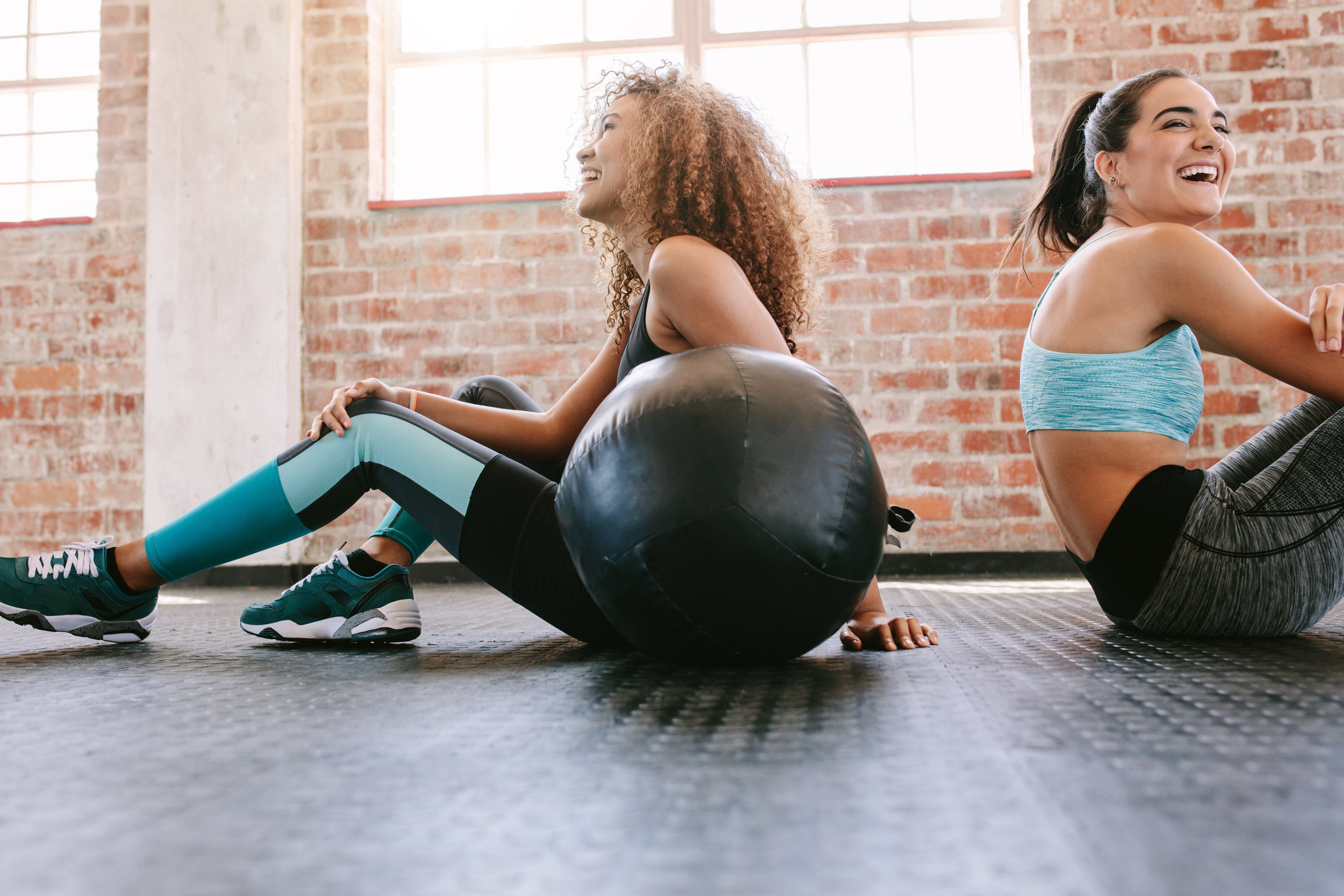 However, another report on older athletes noted low bone density in 22–50% of elite athletes versus 12% of the general population.

Healthy bone formation in your early years is so important to long-term health.

One study found that “physical activity helps maximize bone mass during childhood, adolescence and early adulthood, maintain bone through mid-life, diminishes bone loss with aging, and improves stability and strength to minimize falls and fractures in the elderly.” That shows that what begins in childhood has a continuing impact on aging.

Another review of bone density in young athletic women found there was a window of opportunity around peak bone mass formation that was especially responsive to weight-bearing exercise to build bone density. As mentioned earlier, 90% of bone mass is accumulated in the first two decades of your life, so those late teen years are crucial to bone density.

But those results and benefits don’t disappear as soon as girls stop participating in sports.

A study comparing former athletes against active women, women with irregular and inconsistent activity, and sedentary women found that the former athletes consistently had higher bone mineral density results. The study concluded that an hour or more per week of regular vigorous weight-bearing exercise is associated with an increase in bone mineral density within a normal population. It also confirmed that long-term weight-bearing exercise is an important factor in bone density and fracture prevention.

While the obvious concern is triad and its related symptoms, excessive exercise can lead to other injuries, like stress fractures. Particularly common among distance runners, stress fractures can begin to show up when bone remodeling can’t keep up with the repetitive pressure put on their legs.

Excessive exercise has also been linked to exercise addiction and various eating disorders. And when energy availability is inadequate, the negative effects of exercises on bone are more pronounced. 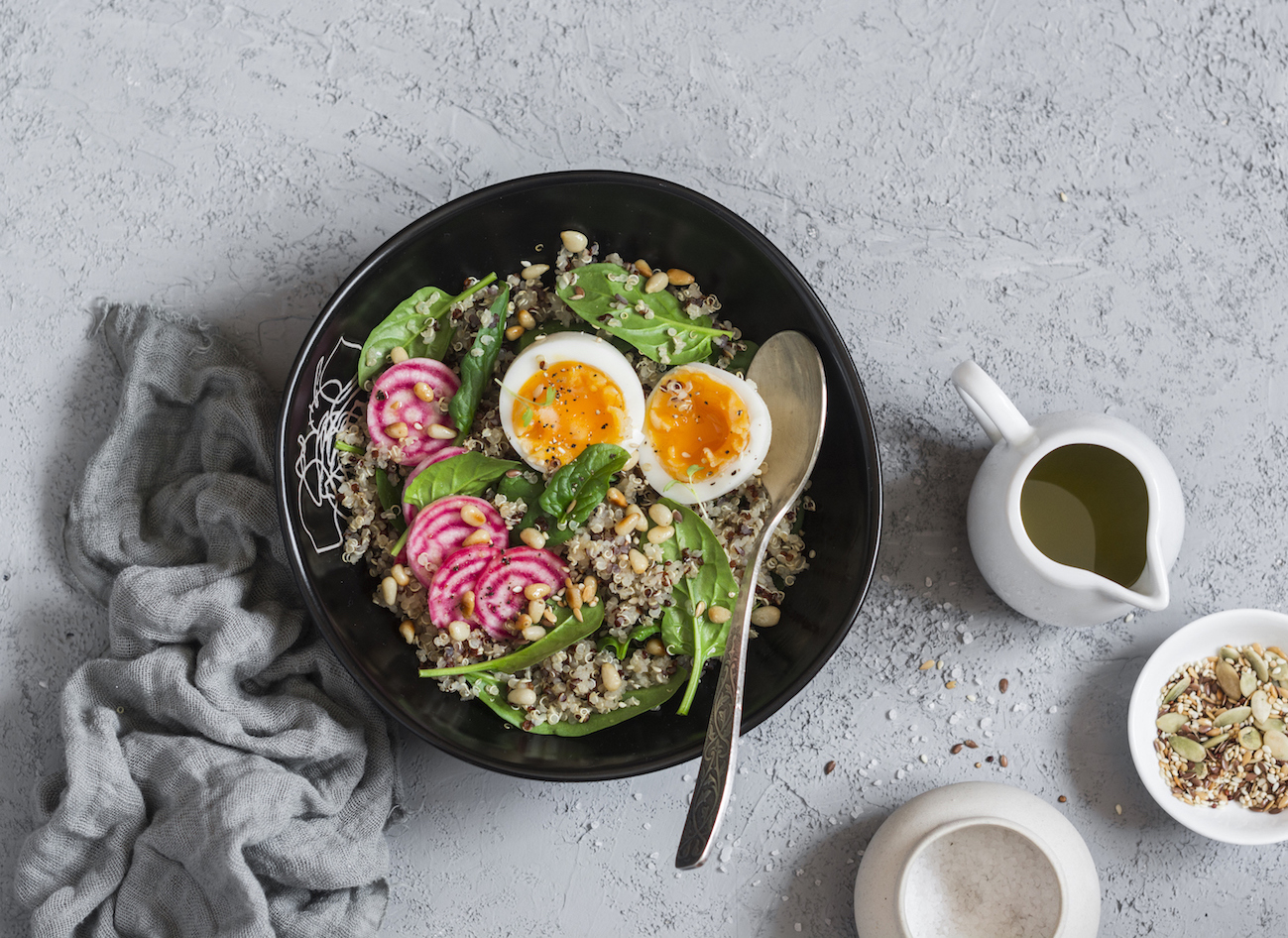 Once you’ve recognized its symptoms, Female Athlete Triad can be addressed. Each symptom — low energy availability, irregular menstruation, and low bone mineral density — can be addressed individually, while triad as a whole can also be dealt with. Because some symptoms are more difficult to reverse at later stages, prevention and early detection are best.

Whether you recognize these symptoms in yourself or a loved one, dealing with Female Athlete Triad begins with a desire to reclaim your health. A multidisciplinary approach is recommended and can include sports physicians, gynecologists, trainers and coaches, nutritionists, psychologists, and physiologists.

What you can do:

The goal is the restoration of regular menses. Menstrual regularity is a clinical marker of reestablished energy availability. As it’s typically the first sign of triad in female athletes, a missed period can be a useful tool for diagnosis and early intervention.

While hormonal contraceptives can help reestablish healthy menstrual patterns, they are not recommended as a primary treatment for Female Athlete Triad. Contraceptives alone cannot improve bone mineral density — and can, in fact, have a negative impact on bone health — so they must be paired with increased energy availability to impact bone mass positively.

Symptoms of the Female Athlete Triad can be easily ignored or wrongly attributed to hundreds of other causes. It’s also a condition that many people aren’t familiar with. But, now that you know what triad is and how it can impact your health for years to come, it’s easy to understand how important early detection and prevention are.

And remember, Triad symptoms can show up in non-athletes of both genders as well, making this a much more prevalent condition than many realize.

Other than recognizing disordered eating patterns early on, the first obvious sign of Triad is generally menstrual irregularities. Do not ignore these signs in yourself or in loved ones. Unless you’re pregnant, missing several periods is not healthy and needs to be addressed with a healthcare professional.

If you’re an athlete, you don’t necessarily need to reduce your training schedule to combat the effects of the triad, but can often improve health through adequate nutrition. That being said, incorporating a rest day can have huge health benefits and may help to reestablish regular menses.

Small increases in body weight have also shown to be effective in resuming normal menstrual cycles.