There is a curious phrase “the calcium paradox” that has been making the rounds in health circles, in regards to osteoporosis. The paradox refers to the fact that westerners consume the most calcium, yet suffer from the highest rates of osteoporosis.

The popular explanation of this anomaly is that our high consumption of calcium mostly comes courtesy of very acidic dairy products, so your body must compensate by stealing calcium away from your bones – as it’s very alkaline and able to absorb this harmful acidity.

The end result they say is our bones experience a net loss of calcium, which seems to explain the huge increases in osteoporosis.

But is dairy really the culprit, or just guilty by association?

There seem to be an equal amount of ‘authorities’ on each side of this dairy paradox. The dairy lobby got the head start with incessant ads, most memorably the campaign started in 1993 with the planet’s biggest celebrities wondering if you “Got Milk”. The commercials indicated that milk would be the protector of our bones, as it’s super rich in calcium (around 300 mg per cup).

However, the stats seemed to indicate otherwise, as during the same period osteoporosis rose as fast as dairy sales. So the knee jerk conclusion for many has become that… calcium from dairy does not help your bones.

However, it’s not quite that simple as there are many variables to the equation. Our present day habits; every single diet decision we make, whether we walk or drive to the store, or choose a desk job over one in the great outdoors, all affect the health of our bones.

Picture the average sedentary, vitamin D deficient American who is said to consume 50 gallons of sugary soda pop per year, as well as many more detrimental foods. They are heading down an inevitable road to osteoporosis that no glass of milk can be expected to stop.

To be fair and balanced with beleaguered dairy means maybe we shouldn’t have ever expected it to miraculously cancel out all the many modern impositions we have put on our bones.

Does Dairy Do Damage Control?

Remember M.A.S.H.? Constantly overwhelmed, the nurses and doctors frantically did their best to literally just stop the bleeding. Due to the amount of damage done, they lost many patients. And even in times of peace, doctors lose patients, and we wonder why they couldn’t have done more. Though most would agree their chances for survival would be worse without a good doctor nearby.

So instead of asking “why hasn’t dairy saved us from osteoporosis?” today we’ll address a better question: would your bone health be better off with – or without dairy?

Today’s common western diet is rightfully referred to as S.A.D. The Standard American Diet is the thousands of processed and manipulated derivative products we love to consume that share a similar quality: they are acid forming. White flour, sugary foods and drinks, meats, coffee and much more all are more acidic than alkaline.

But haven’t acidic foods have been part of our diets for thousands of years? Think of old Aristotle, after a busy day philosophizing, munching on leg of lamb, with a side of olives, grains – all acidic foods. Nothing unhealthy about that, because he was likely wise enough to balance it out with even greater amounts of alkaline foods like green vegetables, peas, beans, lentils, spices, herbs and seasonings, and seeds and nuts.

In fact, the vital importance of correct balance and moderation is one of the great contributions the ancient Greeks gave the world. If he could speak today, Aristotle would agree that to best maintain your (bone) health, your diet should consist of a balance of more alkaline forming foods than acid forming ones.

The repercussions of acid overload are it:

As you see, it’s not acidic items like modern milk that necessarily harm us, it’s the amount of acidic items that do.

There are many saying we have upset our pH balance to such a degree that there is no one product (milk for instance) that can correct the manifestations the imbalance brings, such as porous bones.

Understand that for several generations, the majority of western people have inverted and skewed the delicate alkaline to acid balance to such an extent that osteoporosis is just one of many repercussions.

Dairy- Let’s Stick To The Facts 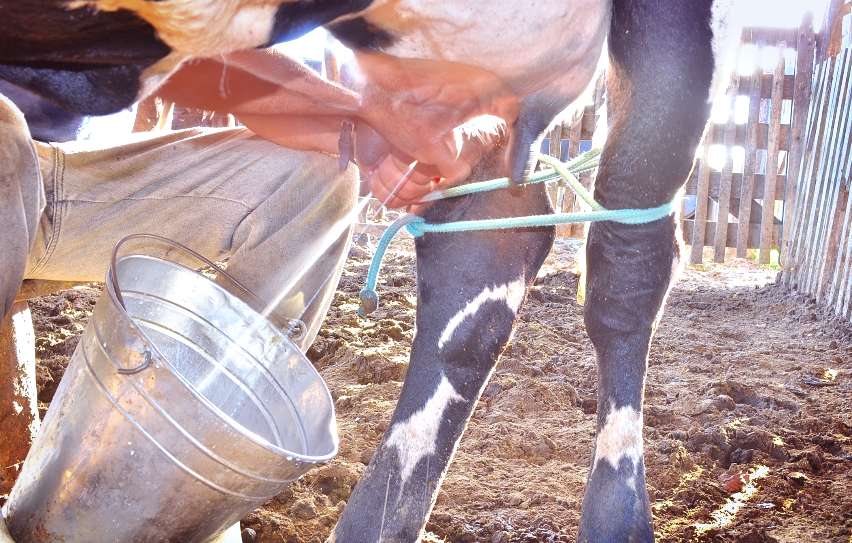 The Two Sides Of Every Story…

There are also some good reasons to refrain from today’s typical cow’s milk however.

Make no bones about it, as the Greeks advised, we need balance. It is simply not healthy to get all your calcium from milk, and maybe none, if you can avoid it, from the mass produced, hormone laden, pasteurized stuff.

If your diet and blood is more acidic than alkaline, it stands to reason that adding acidifying modern milk on top will take you even further from the optimum alkaline/acid balance.

Traditional raw milk, so rare today, once did conveniently and safely nourish bones. If you can get your hands on this unpasteurized, hormone free product, (by searching the internet to find a local producer near you) then you’re holding an age old beverage that conveniently provides a unique and high level of calcium, phosphorous and protein in one cup.

You must carefully decide whether or not to consume regular milk, as today’s mass produced stuff conveniently rides on the beneficial, pure reputation of the almost forgotten traditional raw beverage.

If you smartly are already eating a healthy balance of alkaline to acidic foods, then the ample calcium that any milk delivers is likely to actually help your bones.

But given all the ‘extras’ mass produced milk comes with these days, it’s a coin toss whether or not the rewards for your bones outweigh the other significant risks.

No comments yet
Comments

My mother, who died in 1991, drank lots of milk every day, but had very bad Osteoporosis. Her bones were so porous that her doctor, my cousin, said her bones were like swiss cheese, and she even developed Scoiosis.from the bone loss, so I am not a believer in drinking milk to prevent bone loss. Algae Cal and Strontium Boost sound the best to me! Thanks for providing it. Janet

Janet, thank you for your comment and sorry to hear about your mother and her struggles with osteoporosis. We agree that dairy isn’t always the best choice for everyone and it’s good to hear that AlgaeCal Plus and Strontium Boost are your first choice to increase your bone density! Thank you again and we appreciate your feedback.